What on earth are Enhanced Campaigns?

Why do Google want you to use them so badly!?

By now you may have heard a little bit about the strangely-named ‘enhanced’ campaigns in Google AdWords. You’ve probably received an email or two from Google & maybe even a phone call from an over-zealous rep.

In this short(ish) blog I want to explain what they are, why Google have changed & what WebSavvy is doing to safe-guard our clients interests as we transition into the new AdWords system.

Why all the fuss about Enhanced Campaigns?

This is the single biggest change to the AdWords system since Quality Score was introduced in 2005. It’s big, but what is it? It’s a fundamental shift in the way that your ads will be shown on different devices, locations, times & networks.

In other words Google has changed the rules ostensibly to help us all transition into the new world of multiple devices.

You may have noticed that not only do we all have smartphones now, many of us are using them & tablets (especially in the evening) as well as our computers quite differently.

Our ‘search’ for stuff/answers/things now spreads across these devices & the way we search has changed. Plus there are new devices coming, such as Google Glass & wearable computers, smart watches etc – many of which Google will want to show ads on!

So all of this is to enable Google to show ads more often in the right context, to the right person. 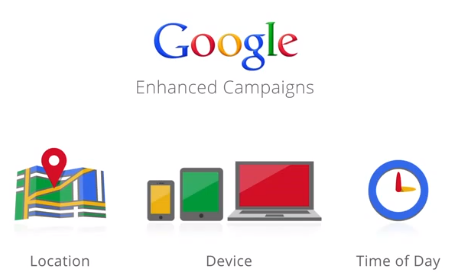 So what’s the problem?

The problem is that for sophisticated advertisers many of the changes are a step backward. The main two are that we can no longer target tablets & desktops separately. And that we can’t run mobile-only campaigns any more.

What does this mean for you? A few things.

Wait before making the change

Because the engineering guys at Google are still catching up to the new changes (ie much of the stuff behind the scenes isn’t ready for the change yet!)

From all the discussions we’ve had with industry professionals around the world (I was speaking at a Google event in Melbourne just last week about this) we know that the smart marketers are waiting.

We’re waiting because the systems are available for us to do this well yet, and because we know costs are going to rise for you!

Our belief is that forcing all advertisers to show their ads on tablets AND desktops will create more competition for limited ad spots – therefore increasing costs.

Combined with some strange settings with mobile campaigns (that don’t allow us to target only mobiles) we think this will increase costs even more.

This was confirmed by new research out overnight as detailed in this article in search engine land (one of the 30 blogs we review daily to keep your campaigns on the bleeding edge of global best practices).

This shows that even though many advertisers are waiting , costs have already started to go up – we’re seeing the same thing in a few client accounts… because competitors have moved to Enhanced early (and they probably don’t know what they’re doing) they’re pushing prices up for everyone!

Another big reason we’re waiting is that we’ll have less control in terms of targeting devices. We like control! In fact when it comes to your campaigns we’re control freaks! Because control means better ROI.

We’re not happy (like the rest of the industry) about this lack of control but Google don’t seem to care. There’s a lot of spin & I’ve been told by more than one Google employee that they’re being incentivised on how many of their agencies they get to update before June 30!

Google is giving bonuses to their staff to get them to make sure your campaigns are updated 3 weeks before the automatic update on July 22.

We don’t think that makes good sense for all the reasons above.

We’ll be transitioning our clients campaigns in early-mid July (not the last second, but also not too far in advance).

So what happens next?

As far as AdWords goes, our clients don’t need to worry about a thing – that’s what they pay us to do.

We’ve done hours of research into this, have moved our own campaigns to the new system & are continuing to chat to our peers about best practices.

Our agenda is to get our clients the best possible ROI – NOT the highest spend.

We firmly believe our approach is the best one for your bank account!

One last thing to consider

One thing that we would like you to consider is that more & more people are using your site from mobiles & tablets (which is why we’ve been including those stats in our monthly reports since 2011).

Please talk to your web designer/developer about your site experience on these devices & ensure that your users will have a great experience – this was important last year, but it just got a lot more important.

Your site must work well & look great on those smaller screens – it’s where your consumers live.

So…..  as they said to me on Virgin Australia last night: sit back & enjoy the ride.

Just be prepared for some small bumps – (or large ones if you don’t know what you’re doing) cost per click is likely to go up over the next 3-6 months.