This photo making the rounds on social media didn’t help things out at all. 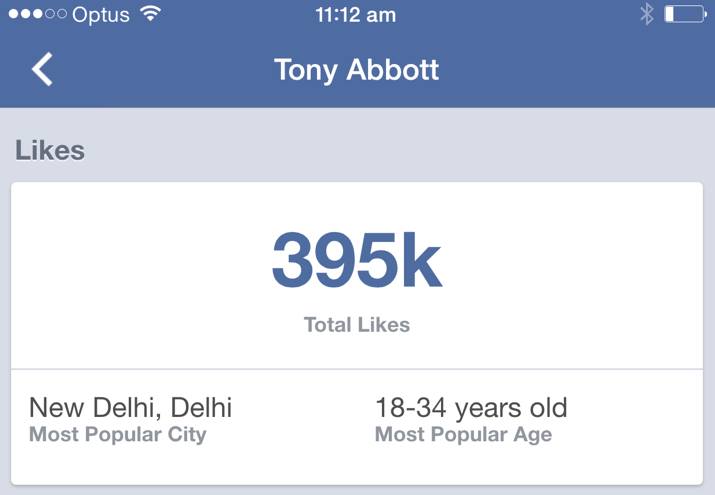 The insinuation is that Tony Abbott bought over 100,000 likes from India.  But did he really do it?

Well you can find out with a little leg work.

Facebook has a tool that just isn’t reported on or publicised enough.  It’s called “graph search”.  It lets you find out all kinds of things without being connected to pages or people at all.

Seriously, go to your Facebook search bar and paste in this : People who like Tony Abbott and live in New Delhi, India

But if you were to look a little further at another major Indian city and type in:  “People who like Tony Abbott and live in Mumbai, Maharashtra, India” you might see this vague “more than 1,000” number pop up again! 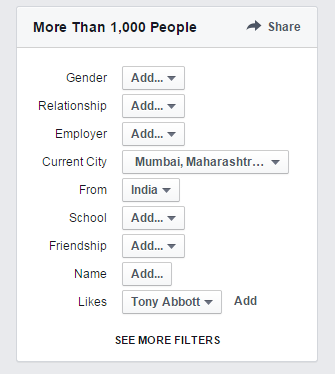 There are more than 100 people, suspicious, but if you look at the other pages liked by these people, it looks like they’re legitimate fans of the Liberal Party and like the types of things you’d expect.

I’m very certain that Tony Abbott didn’t intentionally buy these likes, and that his PR team was likely fooled by some digital marketing company that had a great promise of very cheap likes and instant social credibility.

Political optics aside, the downside of having page likes from people who aren’t going to interact or engage with your brand is rather large.

The whole point of having a  social profile page is the unparalleled ability to engage with your community and communicate  your message to people who want to receive it.

Every time Tony Abbott or his PR team make a Facebook post, there’s a good chance that post is going to be seen by people who won’t engage, reducing its effectiveness.

This is just a fantastic and horribly public, example of the dangers of buying cheap likes.